Erice: A leap into the past

Between myth and legend

The history of Erice is lost among local folklore and superstition. The name is the one given by Eryx, the mythical hero and king of the Elimi, to the mountain upon which the temple to his mother, Venus Erycina (later associated with the cult of Aphrodite), was built. The origins of the town are also linked with Aeneas, who also had a claim on the Elimian king’s mother. In Virgil’s narrative, Aeneas came ashore at the foot of the mountain to perform the funeral of his father Anchises. Having lost several ships in a fire, he was forced to abandon there a number of his companions, who set about founding the town.

Another major mythological figure associated with Erice is Heracles. The hero is alleged to have landed in this part of Sicily on his way back to Greece, having stolen the cattle of Geryon (one of the legendary Twelve Labours); during his stay he was forced to kill the Elimian king after he tried to steal the cattle from him. Notwithstanding this, Heracles decided to leave the rule of the kingdom in the hands of the Elimi, with the warning that one of his descendants, Dorieus, would later take over as ruler.Erice – about 32,000 inhabitants – occupies a memorably beautiful site. Developed as a Phoenician and Hellenistic town, it sits at a height of 751m, perched on the mountain of the same name, covering a triangular plateau with a glorious view over the sea. Enclosed within defensible bastions and walls, the town is a veritable labyrinth of little cobbled streets and passages wide enough to accommodate one person at a time.

The houses, packed one upon another, each have their own charming, carefully-tended, inner courtyard that can be guarded from the gaze of neighbours or passing gentry, and so allows family life to take its daily course in absolute privacy. Both the two roads that wind up to the town afford superb views across the plain and out to sea (the one on the north side, overlooking Monte Cofano, is easier). The little town takes the shape of a perfect equilateral triangle, whose symbolism has provoked mystery and endless argument: hemmed in by the Castello di Venere (south-eastern axis) and the Chiesa Madre (south-western side). Exactly in the centre of the triangle is the Church of St. Peter with its adjacent monastery that now houses the E. Majorana Centre for Culture and Science. An intricate maze of narrow streets, each cobbled with rectangular stones, provides unexpected glimpses of churches and monasteries, of which there are over 60, scattered through the town.The cableway is the best mean to reach the summit of Erice mountain. It is comfortable and fast and it covers the way in just 10 minutes with a beautiful panoramic view of Trapani and the Egadi Islands. 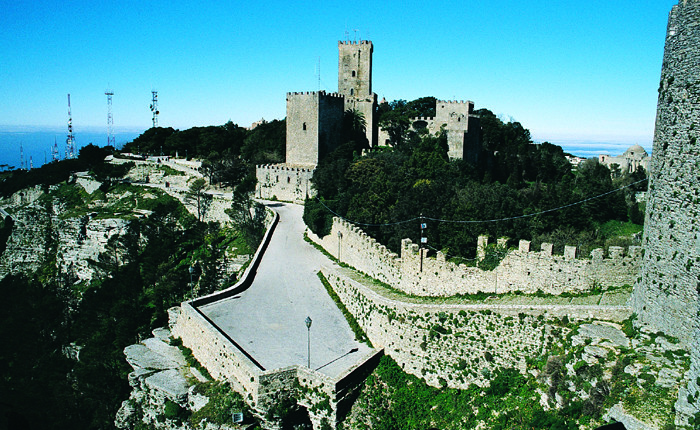